Unsustainable farming has been named by the European Environment Agency in its latest report as one of the top pressures to blame for a drastic decline in Europe’s biodiversity, threatening the survival of thousands of animal species and habitats. They say that EU nature directives and other environmental laws are not being implemented by Member States and more rigorous conservation is needed to reverse the situation.

Find out more from the ‘State of nature in the EU’ report, published at https://www.eea.europa.eu/highlights/latest-evaluation-shows-europes-nature

After the forced postponement of the SEED transnational mobilities due to the Covid19 pandemic, the partners of the project have started again to organize the traineeships abroad. For a proper implementation, partners are working on the Assessment Standards, one of the key deliverables of the project. The document will serve as reference point during the piloting in order to guarantee the effectiveness and impact of the learning experiences, in particular for those competence units that have been identified by partners as suitable for being piloted during the transnational mobility. The deliverable will help to evaluate the traineeships, check the students progresses and in turn the Curriculum effectiveness and relevance.

The assessment standards have been developed in consistency with the EQAVET framework in order to guarantee a common standard and face the several differences that exist in the VET systems at national level. The EQAVET framework has also defined six building blocks designed to be useful and appropriate for the three main models of WBL:

The building blocks provide guidance and set out activities that help VET providers to develop and support a quality assurance approach for WBL in line with the EQAVET Framework.

The SEED Assessment standards will soon be available for project partners and organizations working in the VET field. Are you one of them? While waiting for the publication, discover the EQAVET framework! 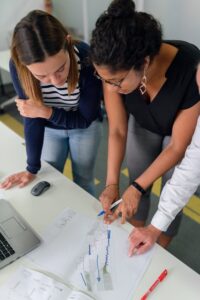 In Italy the platform Agricolus (www.agricolus.com) has been created as a Cloud platform to support and optimize the work of farmers and agricultural operators. It is available in Italian and English. A free login is available for testing. 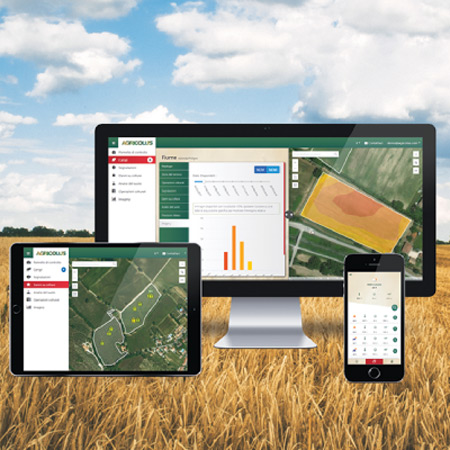 In Flanders similar products have been developed. One of them is Watch it grow (https://watchitgrow.be/en), a free precision farming web application developed for the entire Belgian arable sector and with a focus in the first instance on the potato sector. Processors, farmers, machine builders and agricultural research institutions participate in the application. A free login is available. 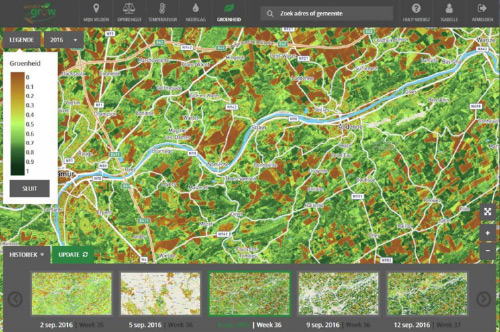 We have consolidated a detailed list of over 200 courses relating to farming.

The participation of the external stakeholders to the SEED project in Italy is now entering a crucial phase. Experts in digital agriculture, academics and companies have taken part in two focus groups organized on the 6th and 14th of February 2020. They have given a relevant contribution to the review of the curriculum and the competence units. Several key stakeholders such as the University of Perugia, Agricolus, CRATIA Confagricoltura, joined project partners in the two day focus groups and will also participate in in the international event planned in Pamplona, Spain from 23-27 February. 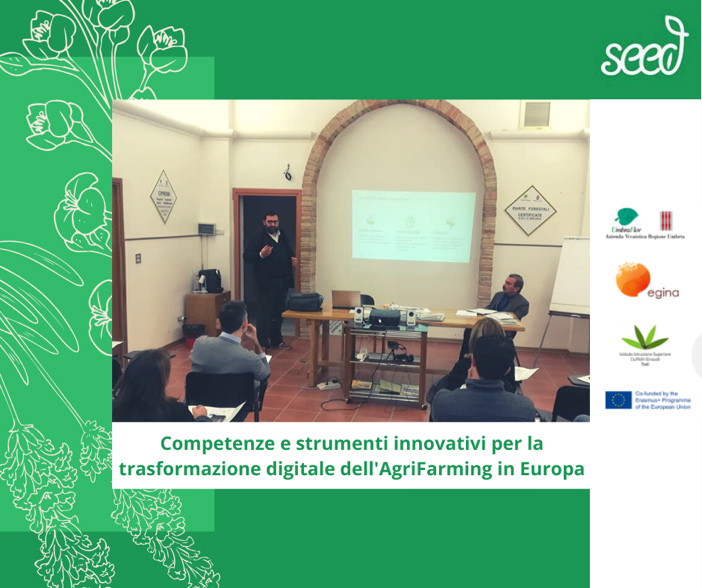 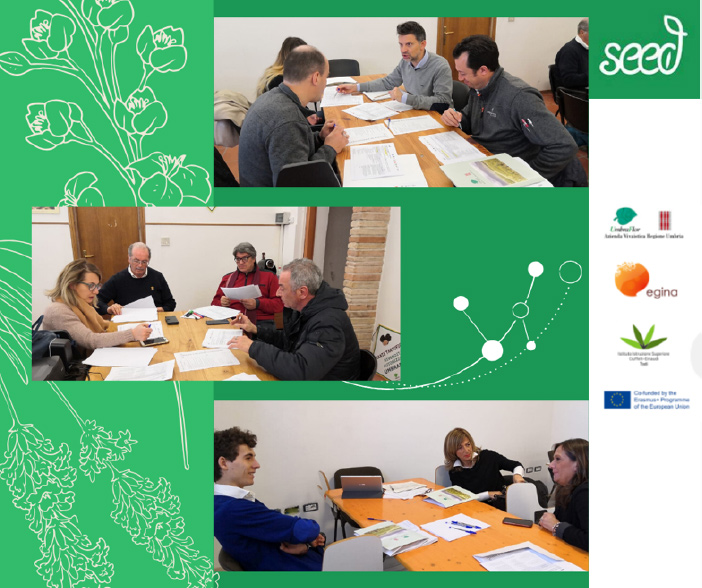 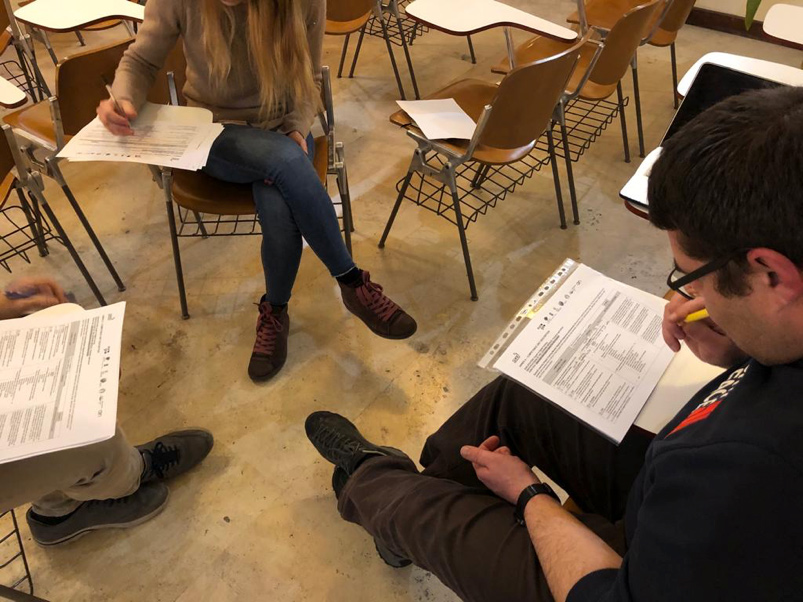 SEED partners and visiting external experts visited the Transfer of Innovation Centre INTIA (http://intisa.es) as part of the meeting held in Pamplona Spain on February 25 2020.

During the meeting, the Agroasesor agri-business advisory tool ( https://agroasesor.es/en/) was described and discussed. The tool allows the generation of data for decision making on different land parcels and agricultural plots. An App is used to establish Traceability helping farmers with crop scheduling, monitoring and strategy. 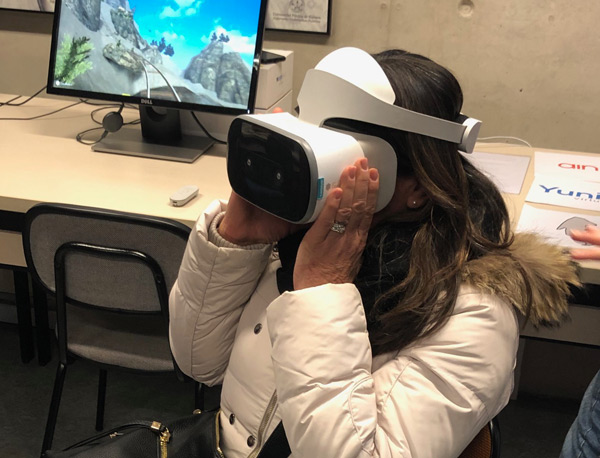 Sentinel 2 satellite functionalities have been introduced in the Agroasesor tool, with high resolution imagery and 5-day sequencing. The tools allow forecasting and modelling of crops in the hands of farmers and land managers. 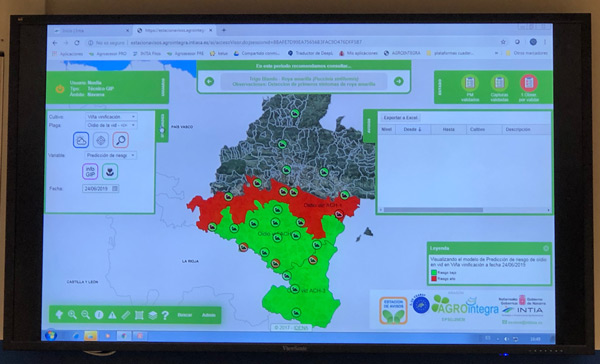 A pest monitoring and warning system was then described as a decision support for crop management limiting treatments. Agrointegra was a Life project with an open platform and collaborative online tool (https://agrointegra.eu/en/).This tool is part of an advisory service offered to associate farmers, transmitting latest data to them. The Nadapta Life project eas also introduced. It created an open platform on crop risk (https://lifenadapta.navarra.es/es/) and tests risk prediction models. 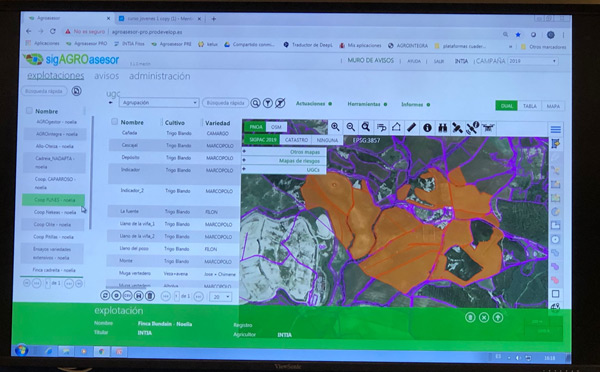 The partners and experts then visited the Public University of Navarre to examine the challenges raised by Industry 4.0, where technologies manage, control and transform workplace processes.

SEED project partners and experts from across Europe meet this week in Pamplona, Spain to validate the SEED vocational training curriculum created for ‘Smart Entrepreneurial Education and training in Digital farming’. The purpose of the meeting is to validate the curriculum content, training methodology and assessment methods. As a European project it is important to identify which units can be related to EQAVET (Quality Assurance in VET training). 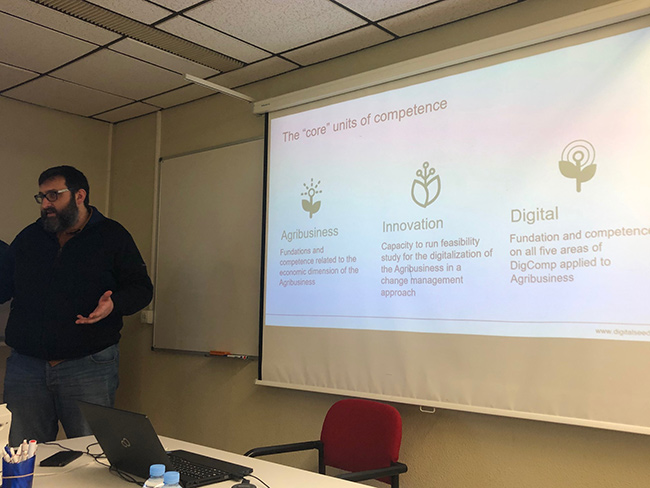 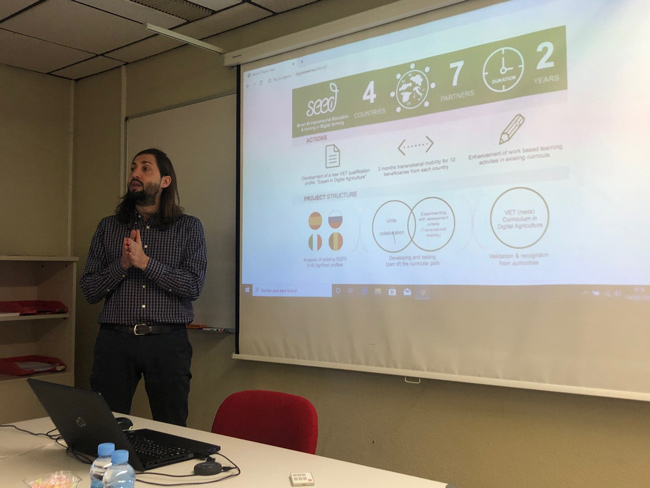 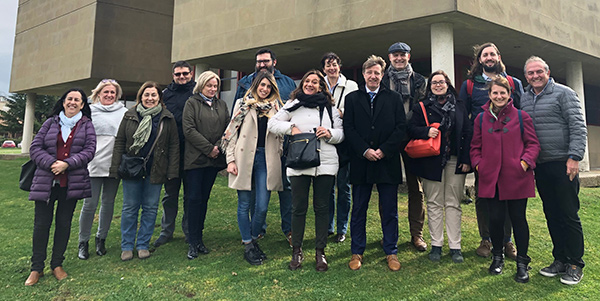 Last week, the Association of Navarra’s Industry (AIN) present the SEED Project results in the Seminar “New skills for digital farming”. This seminar organized by the European Commission and the EIP-AGRI Service Point took place on the 5th and 6th February in Aranjuez.
The purpose of the seminar was to identify tools and approaches that can help the farming community develop the skills they need to fully benefit from the digital transition. The event also explored ways to stimulate the uptake of digital technologies. 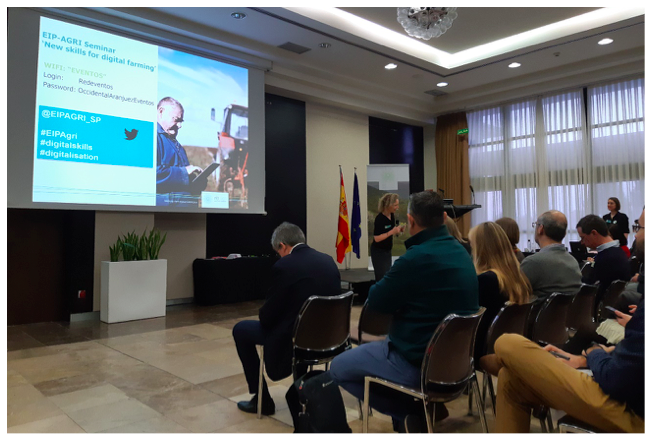 Participants worked in discussion groups. The first day in the identification of skills and competences needed by farmers for digital farming and strategies to address the digital skills gap. On the second day, they discuss how CAP strategic plans can help to fill the gap in the farming sector, by simulating cooperation and explore different ways of connecting agricultural knowledge to innovation.

During the seminar, some successful initiatives that can raise and create awareness on digital skills in the farming community were shared. 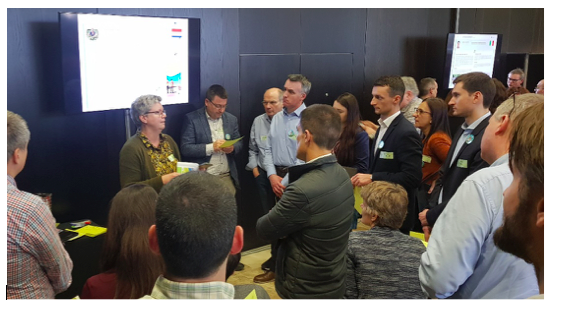 Also, some speakers present innovative projects related to develop skills for farming digitalization. Among them, Sonia Mendoza from AIN presented the SEED Project and its main results. 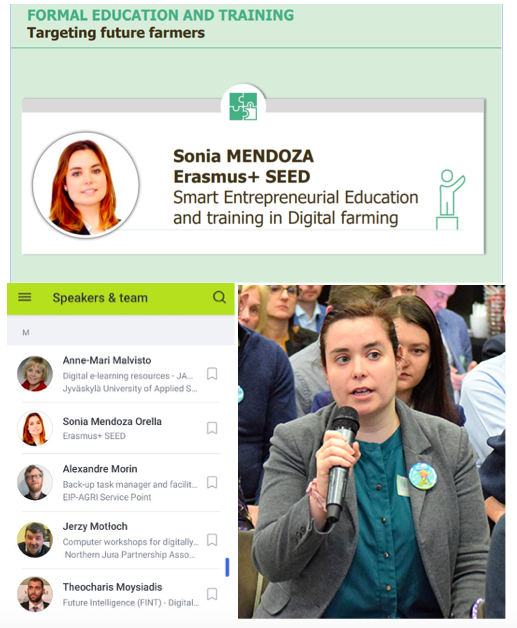 For two summers in a row, Flanders had to deal with a very long dry season. The total shortage of precipitation is estimated as the equivalent of almost 1000 liters.
In the short term, the agricultural organizations are mainly concerned with recognizing the drought as an agricultural disaster, but they are already thinking about better armoring Flemish agriculture and horticulture against new periods of drought. These, together with other extreme weather phenomena, will inevitably occur as a result of climate change. Efficient agriculture must therefore focus more on effective water management.

Given the location, the desalination of seawater immediately catches the eye. “The North Sea is in our backyard, so during the initial consultation with the governor we suggested the idea of using seawater desalination projects.” A faster result can be expected from Aquafin’s offer to use purified waste water for the irrigation of fields. “We welcome this,” according to Algemeen Boeren Syndicaat, “on condition that the basic quality is guaranteed.”

The farmers’ syndicate also points to the substantial investments that the sector has already made in collecting rainwater and reusing process water. For example, rinsing water from milking installations is reused as drinking water for cattle. For the first wash of vegetables, the same water can be used several times and irrigation systems become particularly innovative, which is first noticeable on floriculture businesses.

A modern agriculture with apps and internet, use of drones, GIS and precision farming are key elements in this regard. And these are the core of the SEED project.

Expert in Digital Farming Qualifications Design is now available to download.
It provides the qualifications structure and recommended units of study to be an expert in digital farming.

SEED project partners have undertaken a national review of existing qualifications and VET courses relevant to digital farming domains in the four partner countries, Slovakia, Italy, Spain and Belgium. This has been completed in order to examine gaps and needs. This data has been analysed and is now visualised in the form of a set of infographics. 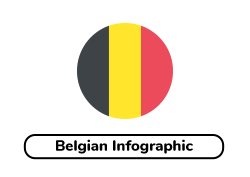 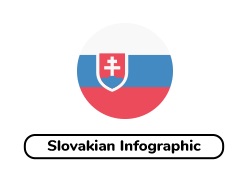 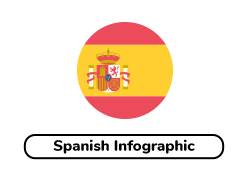 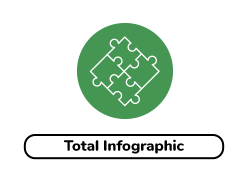 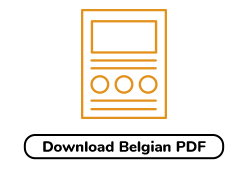 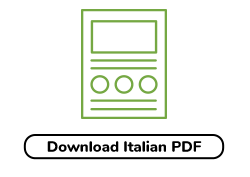 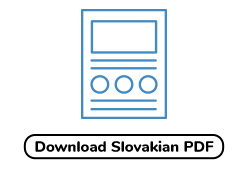 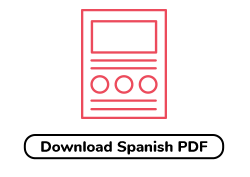 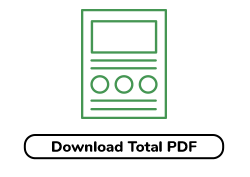 Further details about the 247 courses will be published later in the project
The SEED project seeks to develop and validate a joint vocational qualification on digital farming. The partners presented their initial research results examining the existing situation in different countries, trends in the field and the importance of training actions.

A peer review exercise followed with leading experts from Belgium, Slovakia, Italy and Spain exploring fields related to digital transformation in rural activities. This review dealt with digital knowledge in professional profiles, strategic thinking for value added approaches to digital innovation and the challenge of entrepreneurial actions in decision-making processes. 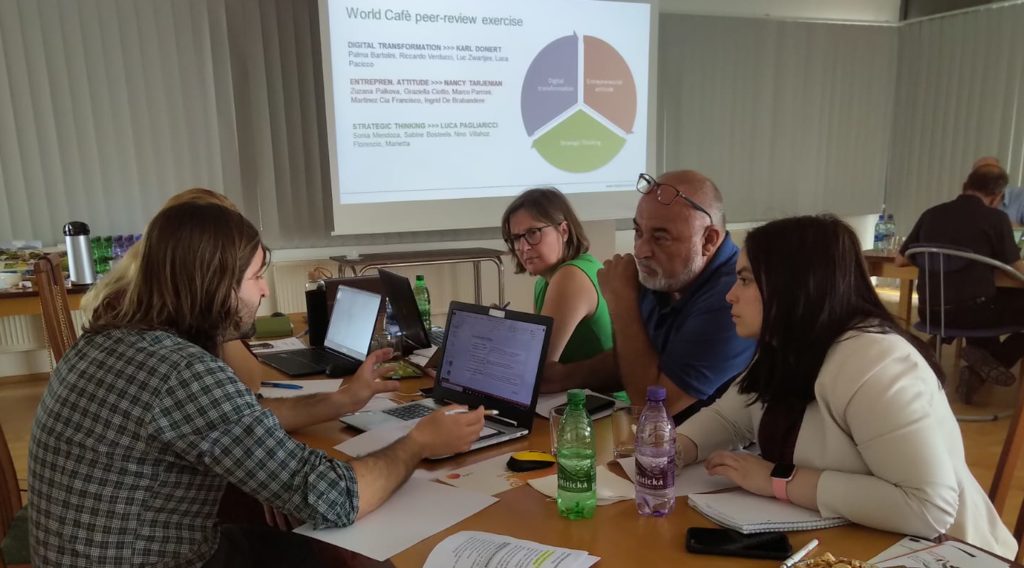 A presentation in May 2019 at the University of Agriculture Nitra Slovakia as part of the first expert peer-review event held as part of the KA3 Erasmus Plus SEED Project. This presentation introduced the project and the research findings on digital farming, related qualifications and competences. It presents the peer review methodology.

All  the SEED Project partners gathered at Umbraflor in the Umbria Region  on 28-30 October 2018 to kickoff the new Key Action 3 VET (vocational education) Forward Looking project funded by the European Commission.

The project partners dealt with many different aspects of the project, especally considering the issues concerning the digital transformation of the rural economy.

A presentation concerning green development solutions was made by Fulvio Ananasso, President of Stati Generali dell’Innovazione, an associated partner to the project.

The SEED project aims to i) increase the employability of young people, by supporting the development of a highly skilled, qualified and mobile workforce, also thanks to transnational placement; ii) support the development of a joint VET qualification at the EU level; and iii) promote work-based learning, supported by a mobility component.

Each of the project outcomes was examined and action plans developed, including work placements and international mobility supported by the grant.